In Showy Show! you are the star of the show. With the support of a fantastic supporting cast, you take center stage in every episode of Showy Show! Different episodes will include preschool, bedtime, and first sleepovers. Showy Show! calls out for unprecedented audience participation and had the Star at home sing songs, dance dances, say key lines, and put it all together for the Grande Finale! Yes, the star is getting ready for the big show, but they’re also preparing to take on all of childhood’s Big Events when they learn how much fun there is to be had with it!

As with all ThinkBox products, Showy Show! is informed by a research-based approach to early childhood education. At ThinkBox, we think of child development as experience-based, interdisciplinary, and collaborative as children journey through an inter-related series of developmental trajectories. 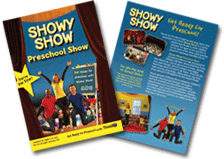 Showy Show! has two major curricular goals. First, is the introduction/demystification of childhood’s Big Events (such as going to school first time, practicing a bedtime routine, getting ready for the day, etc.). By featuring Big Events in fun, musical, and exploratory, children will feel excited about participating in them in real life. The Showy Spotlights offer a comprehensive understanding of the Big Event by giving examples that are tangible, social and conceptual.

Showy Show! also delivers on the promise and philosophy of Watch-Play-Show through The Readys. The Readys first have the audience watch a musical passage that visually reviews the different parts of the big event (in the Watch What it’s About Today song). The Readys then have the audience act out, through dramatic play, various parts of the big event. (They do this within the topic specific songs, the Showy Spotlights and the Showy Cue Cards). Finally, The Readys encourage the audience in the “Show What you Know” song to show their grownup what they’ve learned and to apply what they’ve practiced to the real life event. 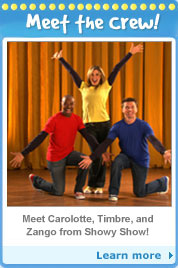